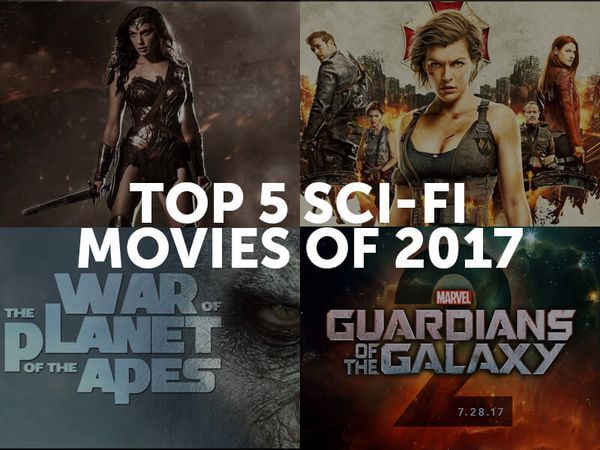 This year is loaded up with numerous sci-fi films, but only few are worth watching. Here are the top 5 must-see movies that will take your breath away. Of course, the list may seem subjective, but I am sure that at least one of these pictures will seem to you as gripping as I expect them to be. Check these short descriptions and highlight the release dates in your calendar.

The events take place during World War I and unfold the story of the Amazon princess Wonder Woman (Gal Gadot). She meets Chris Pine, who is playing an American pilot Steve Trevor. Being heartened by his words about “the war to end all wars,” she decides to wield her powers for the sake of humanity. Patty Jenkins, film’s director, uses all his experience to revive Wonder Woman’s character.

Being devoted to the franchise, a director Matt Reeves has created another part of Planet of the Apes for lovers of this setting. Caesar, a highly intelligent monkey from the previous film, is on his way to gather an army of apes to oppose human forces commanded by Woody Harrelson playing sinister Colonel. This movie will become the ninth in this franchise and, hopefully, as captivating as the rest.

Depicting the events after The Force Awakens, the episode will be released at the end of this year featuring almost all cast members from the previous movie as well as Laura Dern and Benicio del Toro. It is a part of new Star Wars trilogy, which is likely to be finished at the end of the second decade. Unluckily, the film’s title doesn’t give any clues about its plot.

This spring, the worldwide recognized manga Ghost in the Shell is to appear as live-action adaptation with Scarlet Johansson playing a protagonist Motoko Kusanagi. The movie is to depict the cyberpunk version of Japan suffering from the acts of terrorism. Public Security Section, together with Major Kusanagi, are going to put down the disturbance.

A long-awaited sequel of the legend is about to rouse science fiction cinematography one more time. With Ridley Scott being a producer, a gifted filmmaker Denis Villeneuve took over the director’s place. Since Robin Wright, Dave Bautista, Ryan Gosling, and good old Harrison Ford are cast members, the movie seems to be pretty promising.

Futuristic themes are getting much more popular among the public these days. It can be explained by technological development that also influences the quality of the cinematography and its graphic potential. So, watch the sequel to Blade Runner, a live-action adaptation of a manga or the expansion of the favorite franchise, and wait for even more sci-fi masterpieces in the nearest future.